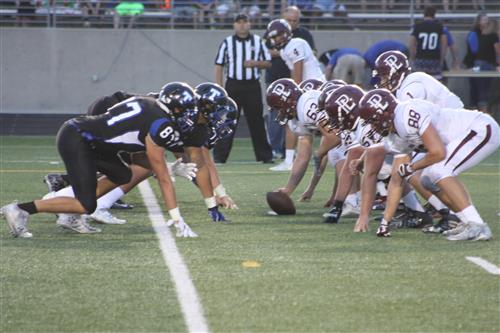 The annual Titan vs. Monarch football game brings fierce rivalry but also a chance to unify both high schools in collecting donations for those affected by Hurricane Harvey.

The stands were packed for the annual cross-town rivalry football game. During halftime however, both schools united as one, collecting donations to support Hurricane Harvey victims and their families. Both Titan and Monarch cheerleaders helped pass a bucket between each of their schools to collect donations. The money was gathered as one contribution to help in disaster relief efforts.

Click here to check out Andy Kendeigh's report on KETV.

The Papillion La Vista Community Schools does not discriminate on the basis of race, color, national origin, sex, disability, religion, age or other protected status in its programs and activities and provides equal access to the Boy Scouts and other designated youth groups. The following persons have been designated to handle inquiries regarding the non-discrimination policies: Students: Dr. Trent Steele, Director of Secondary Human Resources and Student Services, 420 South Washington Street, Papillion, NE 68046 (402) 537-6214 (tsteele@paplv.org). Employees and Others: Dr. Kati Settles, Assistant Superintendent Human Resources, 420 South Washington Street, Papillion, NE 68046 (402) 537-6206 (ksettles@paplv.org). Complaints or concerns involving discrimination or needs for accommodation or access should be addressed to the appropriate Coordinator. For further information about anti-discrimination laws and regulations, or to file a complaint of discrimination with the Office for Civil Rights in the U.S. Department of Education (OCR), please contact OCR at One Petticoat Lane, 1010 Walnut Street #320, Kansas City, Missouri 64106, (816) 268-0550 (voice), or (877) 521-2172 (telecommunications device for the deaf), or ocr.kansascity@ed.gov.
Copyright © 2002-2020 Blackboard, Inc. All rights reserved.